As we get ready to release Elements of Dreams, a big question came up on when would be the best time to release the game?

Doing a quick search on the web I was able to find an article on Games Radar of upcoming game releases for AAA studios. While this list doesn’t contain mobile or indie games, it at least gave me some information on major studios, who are likely to consume game media with their marketing prior to and during their releases.

After grabbing the list of release dates and names from the Games Radar website I threw it into a text file and refined it for data analysis. After molding the data into csv compatible format I re-saved the file and imported it into my favorite data visualization tool. In my case this was Tableau, but PowerBI could work here as well (note that Tableau Public is free to use if you don’t care about keeping the data public, which in my case I didn’t).

Looking at the initial information October looked to be the busiest month for game releases, followed by November and then it began to taper of in December and January before picking back up a little in February (I had some data for after February, but it seemed rather sparse as I’m assuming most companies aren’t going to commit to specific dates that far out).

This makes sense from a business perspective especially for the AAA studios, as many of their games cost upwards of $60. So scheduling the release prior to the holidays (and well before in the case of October) increases the likelihood that their games are purchased as part of presents for the Holidays. This also means that media is going to be saturated with their advertisement during this time and it will be hard for an indie game rise above the tide. Looking closer at the data by week, we can see that nearly every week up until the week of December 12th has at least one game being released. I also broke it down by platform type in this visualization so we can see that there are a lot of PC as well as console games planned to release prior to the holidays (which makes for a crowded market for any indie developers focusing on PC). Mysteriously absent are the dates after December 12th to before January 16th.

This appears to be a relatively quiet period (at least for AAA), and depending on the cost of your game may be the best time to release. Games that may cost something may be good before (but may still be competing with AAA studios for advertising) or after the holidays. Games for free are probably going to be best after the holidays when advertising has quieted down.

For Elements of Dreams we are planning on providing the first episode for free so this looks to be a good time for us to release if we want to utilize our advertising budget. I’ll leave it to others to assess their own right time.

For any of those looking to explorer the visualization more you can find it here with a preview below. 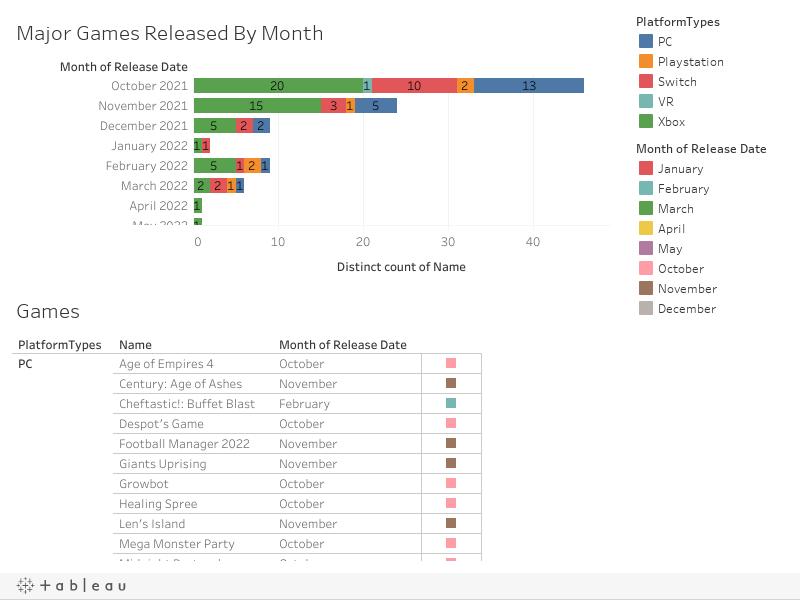 Note that many of the games mentioned on the Games Radar page either didn’t have a date or had a mysterious TBC (so that was excluded). If anyone knows of a better datasource I’m happy to update the visualization and post with it.